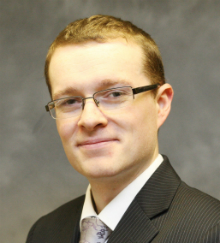 Since calling to the bar in 2012 Craig has been involved in hundreds of cases including some of the largest and most complicated trials to be heard in the High Court of Justiciary in that time. Craig enjoys a reputation for being hard working, knowledgeable, and affable, which is reflected in his popularity among his colleagues at the bar and with instructing agents.

Craig has an interest in all areas of criminal law, and particularly enjoys cases raising complex and difficult issues, factual and legal. He is equally comfortable receiving first instance and appellate instructions, and acting alone or with a leader.

In 2015 Craig was elected Treasurer of the SCBA (Scottish Criminal Bar Association) by his peers, re-elected in 2016 and 2017.

Gubinas and another v HM Advocate (2017) – Full bench of five appeal on what finders of fact can make of real evidence generally, and video evidence in particular. Junior to Brian McConnachie QC.

HM Advocate v IP (2017) – Successful defence of a Crown appeal on whether undercover police conduct in an online forum amounted to entrapment.

Reilly v HM Advocate (2017) – Partly successful appeal centred around the issue of large time gaps in a case relying on the doctrine of mutual corroboration.

HM Advocate v Dalgakiran and others (2016) – Successful defence of an allegation of importing 3.2 tonnes of cocaine. Trial in excess of 50 days. Junior to David Moggach.

HMA v Clarke and others (2016) – Successful defence of allegations of drug dealing and laundering millions of pounds. Trial in excess of 90 days. Junior to Donald Findlay QC, with Victoria Young.

HMA v Duffy and six (2015) – Successful prosecution of terrorism charges and conspiracy to murder. Trial in excess of 50 days. Junior to Paul Kearney.

HMA v Sheerin (2015) – Successful defence of an allegation of being a drugs courier.

HMA v Docherty (2014) – Successful prosecution of a murder from 1986. Trial in excess of 50 days long. Junior to John Scullion QC.

HMA v Snowden and Jennings (2013) – Successful prosecution of a series of offences including a triple murder. Trial in excess of 50 days long. Junior to Alex Prentice QC.