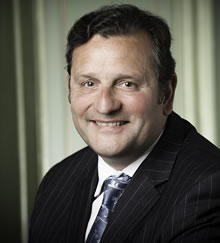 Derick has an extensive range of experience. Prior to calling, Derick was a principal solicitor in private practice, in High Blantyre and Falkirk, for many years dealing mainly with criminal trials, Children’s Referrals, matrimonial and reparation actions,

Since calling to the Bar, he has proved extremely popular with agents, earning a reputation as a hard working, unflappable counsel, who can be relied upon in any situation. He has considerable experience in criminal trials and appeals, and between 2007 and 2010 was employed by Crown Office as a full-time Advocate Depute. He continues to be instructed as ad hoc Advocate Depute.

Derick is now a very senior junior counsel and has prosecuted and defended most types of case. He often leads other junior counsel in complex and serious cases, including charges of murder and long-running trials involving allegations of historical sexual abuse and multiple charges of rape.

Hoekstra and others v HMA – long- running appeal involving many novel areas of law, including some of the earliest examples of challenges under ECHR legislation.

HMA v Adam Carruthers (5-week trial, along with junior counsel, on an indictment extending to 35 charges, including 9 allegations of rape).