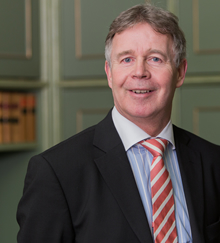 Prior to entering Crown Office as a full time Advocate Depute in January 2000, Drew McKenzie was largely engaged in defenders reparation work but had also appeared as junior counsel in two large and long running fraud cases. After completing his tenure in Crown Office he joined Black Chambers in order to practice crime on a more regular basis. He appears regularly in the High Court as junior alone or as a senior junior and also in difficult cases in the Sheriff Court. He continues to enjoy and thus take instructions in many areas of civil work.

HMA v Hussain and others – three accused males who were a cousin and a brother were prosecuted for historical sexual offences including rape and sodomy directed against other family members.
HMA v Dick x 2 – two brothers were charged with conspiracy to commit murder in respect of the co-accused’s wife. The conspiracy was said to have taken place in Scotland and Sweden.
HMA v Strachan and Others – seven accused child pornography case involving the downloading and distribution of vast numbers of indecent images of children and conspiracy to commit a variety of sexual crimes against children.
HMA v Bone – Prosecuted the first murder in modern times for inaction rather than action. A mother of her 10 month old daughter failed to act when she was assaulted by her partner.
HMA v Haney – Prosecuted the well known Haney family for a series of drugs offences.
Children’s Referral, Stirling Sheriff Court – the referral arose out of an allegation of rape by the father of the household against a 13 year old girl who was a close friend of his own daughter.
PF Glasgow v Glasgow Royal Infirmary – Appeared for the Hospital in a Health and Safety prosecution involving the illegal disposal of clinical waste.
Fatal Accident Inquiry for the Southern General Hospital – Following the death of a child during delivery.
Greater Glasgow Health Board v W – Appearing for the Health Board who sought to have a person who was suffering from tuberculosis compulsorily detained.