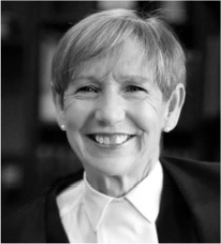 Frances McMenamin called in 1985 after 8 years in the Fiscal Service and has become one of the busiest and most highly respected members of the Criminal Bar.

After serving as junior counsel in the Lockerbie Inquiry, Frances joined Crown Office as an Advocate Depute where she prosecuted many difficult and complex cases involving murder, fraud and drug offences including the well known appeals of Hoekstra and others.

Having taken silk in 1998, Frances has become recognised as the top female criminal defence counsel, appearing constantly in the High Court, particularly in murder, rape and other sexual offences cases. In addition, she has been a Board member of the Scottish Criminal Cases Review Commission since 2010, appointed personally by Lord Bonomy to be a member of his Review Group on Post Corroboration Safeguards, re -appointed since 2010 to the Lord Justice General’s Criminal Courts Rules Council and appointed by the Faculty of Advocates to serve on many of its Committees, including the Disciplinary Tribunal, Professional Standards Committee and Direct Access Committee.

She has also served as Vice President of The Faculty Criminal Bar Association. She is also regularly in demand to lecture on various topical legal matters.

Her services to the law as well as to her alma mater, the University of Strathclyde, were acknowledged in May 2009 when she was awarded the Honorary Degree of Doctor at the University.

HMA v Lisa Brown -“The Body in the Burn case”.

HMA v Stefan Millar and Another – “The Stornoway Murder Case” – the island of Lewis’ first murder case for almost 70 years.