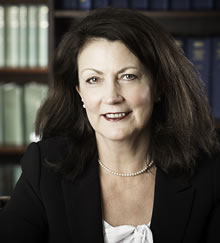 Margaret Breslin was called to the Bar in July 2003 having been in private practice in Glasgow for nearly 20 years. Since calling her principal areas of practice (as they were as a solicitor) are crime, child law and family law. She has successfully conducted the defence of many accused, both in the High Court and the Sheriff Court, who have appeared on complex and sensitive charges ranging from serious sexual assault and rape, to contraventions of S.1 of the Road Traffic Act 1988. In the field of child law, she has successfully conducted many proofs involving issues surrounding contact to and residence of children, been instructed in the preparation of a custody report in the Court of Session and conducted children’s referral proofs, an area in which she has particular expertise.

She is regularly and repeatedly instructed by many well established firms of solicitors. In addition to being very well instructed in her own right, Margaret is also regularly identified by senior counsel as a reliable, focussed and well organised junior who can be relied upon to continue with the conduct of the case in the absence of senior, and who is particularly adept at communicating with clients with clarity and in a sensitive manner.

HMA v Cameron and Fleming – instructed as junior in this lengthy drugs trial in what is now known as the “viewing room case”.

HMA v Strachan and Others – instructed as junior for the only accused acquitted on the charge of conspiracy in this notorious child pornography trial.