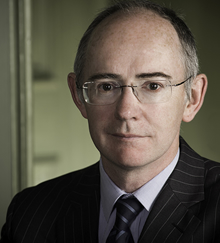 Michael called in 2003, after 5 years in the Crown Office and Procurator Fiscal Service [COPFS] and 7 years as a solicitor in private practice. Within COPFS he worked in the High Court Unit preparing high court prosecutions; in private practice he gained extended rights of audience and appeared as a solicitor-advocate in the High Court and before the Judicial Committee of the Privy Council.

Between January 2006 and February 2009 Michael was an Advocate Depute. During this time he prepared and prosecuted many complex, serious and sensitive cases including road traffic, firearms, drugs, sexual offences and murder cases. In March 2009 Michael returned to the defence Bar where he was instructed in many complex High Court and Sheriff Court cases.

Michael was appointed Queen’s Counsel in 2019 and is currently a full time Advocate Depute..

K v HMA 2001 SCCR 621: Successful defence appeal to the Judicial Committee of the Privy Council on the basis of undue delay