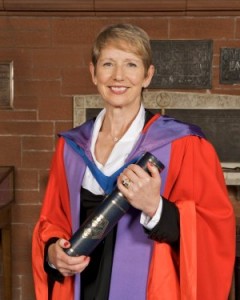 Frances McMenamin QC has received an honorary degree from the University of Strathclyde.

The leading advocate was made a Doctor of the University at Strathclyde’s Barony Hall during the annual University Day celebrations.

Dr McMenamin’s oration was read by Professor Kenny Miller, Vice- Principal of the University, who described her as a great supporter of the Strathclyde Law School, a great ambassador and an incredibly hard worker who had brought great distinction to the University.

“Frances is a very successful advocate, who has brought charm, wit and integrity to the practice of law. She has been a magnificent ambassador to the University and the legal profession, and through her connections with the Law School, has sought to give something back to her alma mater.”