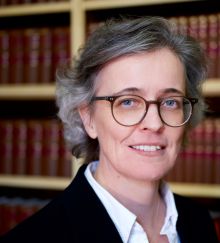 Shelagh brings extensive experience of trials and appeals. She has appeared in many high-profile, sensitive and complex cases – as leader, alone, and as junior. She is known for being innovative in developing legal argument in challenging cases. In court, she is calm and considered – an approach which finds favour with judges, witnesses and juries alike. Her ability to write clearly and persuasively has been demonstrated in submissions to the Judicial Committee of the Privy Council, the ICTY Appeals Chamber, and in civil statutory appeals.

Mark Chamberlain-Davidson v HMA [2012] HCJAC 120: Power of High Court to reject a reference from SCCRC, standard to be applied, application of A6